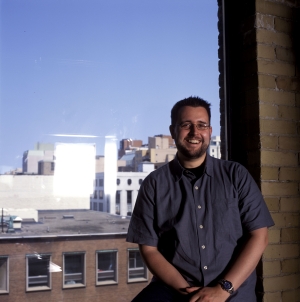 Toronto, Dec 23  2004 - Not many 13-year olds have a clear vision of what they want to do for a career, but then, Mark Bishop was no ordinary thirteen year old.

As a student at Harry Miller Junior High, he decided he was going to be a television producer and director, soaking up photography techniques from teacher Sandra Mitchell, and inspiration from teacher Cathy LeBouthillier.

Fuelled by their support, he moved on to high school at Kennebecasis Valley High, where teacher John Frank saw his potential and encouraged him further.

Overall, I think my greatest encouragement, my drive and passion, came from within the walls of KVHS. From the first day, the teachers facilitated a desire from within to do more. One teacher, John Frank, encouraged me to explore my passion for movie-making. I remain good friends with him to this day.

on his years at

Other KVHS teachers, like Diane Devitt, Bob Munro, and Suzanne Doyle-Yerxa made sure the spark in Bishop grew to flame status, paving the way for him to begin a summer camp in video production.

After leaving home at seventeen to earn a bachelors degree in Applied Arts in Radio and Television from Ryerson University, Bishop met up with a new world of creative, like-minded people. While the prospect of being in a large, strange, distant city was intimidating, he is glad he had the presence of mind to stretch outside his comfort zone.

At the time, no one else I knew had gone there, and in fact, only two other people from high school were going to Toronto. While it was scary at first, it was the best decision I ever made. I teach there now, part time, in the faculty of television and radio."

On the decision to leave home at seventeen

After graduation from Ryerson, the ever enterprising Bishop co-founded a company with Matt Hornburg, his best friend from university. Equally driven to succeed, the two had no intention of being anyone elses employee. They wanted to call the shots, and be responsible for their own successes and failures.

And so it was. marblemedia was born.

When asked about the name, Bishop offers that the duo wanted a name that was nostalgic in a playful way. The sorts of projects they would work on were to be unique, fun, and often quirky, so it was important to have a name that reflected those values. So, while the two sat with a third friend in a little waterside restaurant one night, the name marblemedia surfaced and stuck.

In the beginning, television was the focus. Along the way, the young partners watched as the new media world required more and more content, so they began integrating the two, routinely creating cross platform audio-visual productions to stay in step with current and anticipated market appetites.

Fast forward to present. Spending much of each gruelling week on a production set while juggling an ever-ringing cell phone, Bishop divides the rest of his work life between emails and office matters, pointing out that his office is a great place to be. The TV and music are always on, and Bishop is proud of his many photos of family and friends; the toys from his childhood, including Muppets characters; and, the good lighting to show it all off.

It's a style and approach that works for Bishop. His company has been written up in Macleans, the Globe and Mail, Toronto Star, and many other publications. Hes eyeballing the future with optimism, saying that the future is bright for small to medium sized companies such as his because there are more and more television channels that all need content.

When asked about his favourite projects, Bishop is quick to point out one.

deafplanet.com has proven to be a great success for us, but also, most importantly, for our audiences. We have connected a community of Deaf children around the world and given them content in their language (American Sign Language). I am proud of that.

And so he should be. By all accounts, it is a great success. And, to top it off, his youngest brother, Michael, stars in the show. Bishop has also seen another of his companys productions, This is Daniel Cook, which he co-produces with another brother, Matt, begin broadcasting daily on Treehouse TV, even as he entered production for Burnt Toast, which will be seen on both CBC and Bravo!, and online, beginning Fall 2005. Also in development is Harmony Hotel, a series starring local childrens performing group Kids at Heart.

Its a heady life and a hectic pace that Bishop maintains. One that affords him a good standard of living and provides what most people would consider a basic perk  the chance to schmooze with major celebrities, yet he remains unaffected by it all.

"I've met many famous people, but I dont think they count. I did meet Mr. Dress-Up, oddly enough at a party with the Backstreet Boys, and I got to tell him how much he inspired me as a child. I still love the sound of construction paper being cut with scissors, or the squeaky sound of markers drawing, he grins.

A modest, driven guy with a practical point-of-view, Bishop never forgets where he came from. Saint John is directly referenced as his homwetown on his bio notes, halfway down his companys website (www.marblemedia.com), and he carries the early life lessons taught him by teachers, and by his family, to whom he is proudly and completely devoted.

Where you come from teaches you a lot and helps define who you are and who you will become. Saint John will always be a special place for me, and I want people to ask about it when they read my bio.

Mark Bishop on how he feels about Saint John

Now that Bishop is living the dreams of his youth, he offers a simple piece of advice for others who are looking to the future, citing it as the best piece of advice he ever got.

My dad has often said to take one day at a time, and to keep your back straight!