A CHAMPION OF canadian film

Toronto, April 07 - He slips through at the last possible second. Stealth-like, taking advantage of the lethargic movement of a large, heavy door as it closes. Scanning the room before him, a grin surfaces. Only now is he willing to savour the results of months of effort. 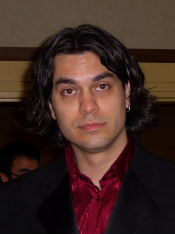 Without the advantage of time to pass a comb through his longish, jet black hair, Euler is a little disheveled. His stylish, open neck, wine-coloured shirt and charcoal suit cloak a tired body that has seen little sleep of late. No matter. His thoughts are on more than his looks. Theres a conference room full of producers, directors, distributors, professional organizations, and national news media to be concerned with. They have come from around North America to talk about the Canadian cinematic experience and the realities faced by filmmakers who create and sell the stories that may or may not end up with theatrical release.

May not? Beyond the need to artistically express oneself, isnt the point of making a movie to sell it to the guys who own the big screens, so you can acquire funding to make more movies? We agree to meet for an interview on the 20th floor of a downtown Toronto hotel. Surrounded by press kits, filmmakers and a handler or two, Euler has much to say.

Canadians have little opportunity to see their own films since they appear on only 3% of the screens throughout the country, Euler shrugs, and, little money is available for marketing and advertising.

Then how are our films being seen outside the traditional and powerful distribution chain?

The festival [Canadian Filmmakers Festival] has started for one main reason -- to bring more attention to Canadian films, Euler offers. He then shifts in his seat, as if gearing up for his next point. I would like it to be redundant -- for it to not be needed in that way. Im not doing the festival just to charge admission and make money. Im doing this to promote movies.

According to one filmmaker at this years Festival, an Ipsos Reid poll said 60% of Canadians would be likely to see a Canadian movie if more of them played in theatres. A promising statistic. But are there enough Canadian films out there? Euler is emphatic that there are. Hes putting considerable time and energy into this new annual festival that brings Canadian film to the forefront. Hes also very quick to stress that Canadian is not a genre, that it shouldnt be viewed as something that needs coddling or special help.

He continues with his thought stream.

Someone yesterday told me there are 42 film festivals in Toronto. 42! This event has got to be the biggest event in the Canadian film industry. Every year, everybodys got to look forward to this as the premier event. What I would like is to have twice as many screenings next year; twice as many panels; industry things going on." 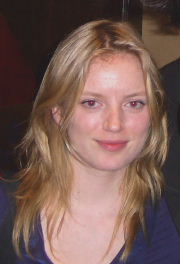 He pauses, reflecting on that mornings robust and, at times, heated, panel discussion between a standing-space-only conference room of industry people, and a group of five panelists who alternated between initiating and weathering verbal storm clouds.

You were at the industry panel with Sarah Polley (photo, L) it was very passionate. Next year Im going to have the exact same panel and bring up the points from the last year and see if anythings changed. So, itll be a yearly kick-off event, until we dont have to do it anymore. I can hardly wait until the day when I say, you know, this panel isnt relevant anymore  were not experiencing these problems'.

Next year. The magical year three, that, in the worlds of media relations and corporate sponsorship, can make such a difference. The year when those who have been watching from the side are more likely to offer the vertical nod, according the event much-needed credibility.

In what way will the festival grow next year?

Im not going to program films just for the sake of doubling the amount of films I show. Theyve got to be quality films. I get so many bad looking films. I put them off to the side right away, Euler says glibly. Yet, he also acknowledges the flip side of those poor submissions; the many Canadian filmmakers who gift us with intelligent, expressive and inspired films; Canadian filmmakers such as Atom Egoyan, an official presenter at Cannes next month.

Euler is effusive. He is sitting upright, preaching like a man of the cloth in a North Preston pulpit.

Any time now, theres going to be that breakout Canadian film, he exclaims.

It feels right that this is the last thing Euler will say.

Perhaps our nation does have a higher concentration of truly talented and disciplined filmmakers who have not yet broken through the clutter of those scrambling up that tall, rung-heavy career ladder. Perhaps the future of the Canadian filmmaking industry does hold great promise. After all, it is the legendary Canadian film director Norman Jewison who once said film is the literature of the 21st century. It is also a fact that more students are enrolling in film schools than ever before. We also know that we hit an attendance record for films in 2002-03, with over 125-million visits to the movie theatres in Canada during that period. Given Jewisons assertion, and the overall film climate in this country, it would appear the market for well-told, film-based stories should only grow exponentially as new generations and cultures look beyond traditional text documents for their information and entertainment.

The obvious issue for the Canadian film industry on a go-forward basis is one that seems to be mired in sales. How do we take lower budget productions from just being completed films, to placing them on a viewing screen for consumers? How will the Canadian film industry invent itself anew and develop strategies and tactics to shake free from the predictable, stale and traditional methods of distribution and marketing that favour those who have access to capital?

Big topics that the 2006 version of the Canadian Filmmakers Festival will likely provide a discussion platform for.