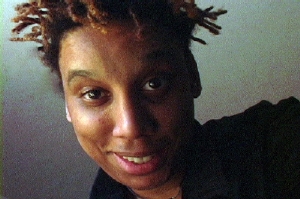 Saint John, NB, May 26 - When former blue-chip corporation employee Norean Goldston left New York post-911 and headed east, she eventually crossed into Canada, cruised through Charlotte County and entered Saint John city limits where she laid eyes on the white, stories-high S-A-I-N-T J-O-H-N letters dominating the Uptown skyline. She stopped and stared in much the way that someone who has just been spoken to in a foreign language does.

The symbolism of the sign was not lost on her as she grinned at its obvious resemblance to Hollywood's famous landmark sign.

It baited her. She had to look around.

That quirky unexpected connection between the modern-minded, synthesizer-playing New Yorker, and the intriguing harbour-hugging city of 19th century buildings, took place in 2001.

The flavour of Saint John so appealed to Goldston, she stayed; over time, collecting many observations about her adopted home. The city became an endless source of inspiration and provided a well of thought for her, and her relationship with it evolved in a mutually beneficial way, as she established herself as a documentarian, videographer and organizer, while rewarding the city for its accommodating nature, with her commitment as a spirited collaborator.

Through her observations, a picture emerged that formed the beginning of a story; a story of contrasts and curiosity that took root as a video documentary. Interviews, editing and arrangements merged to result in a 22-minute documentary called Saint John and Me. First shown at the 2004 Saint John ONE film festival, it has just earned Goldston an invitation to the 2004 Rim Shots Media Arts Festival in Vancouver, where it will be shown as part of the Outer Limits screenings.

Of her newfound, official recognition as an emerging video artist, Goldston, in her characteristic understated fashion, offers, I didnt expect it to go any further than the immigration office. Thats what I created it for [to prove I was an artist]. I guess Ill consider entering it into other festivals now.

If it is possible to hear someone smile over the telephone, I know at this moment that I am. For Goldston, it is a moment of glorious reward in a sea of uncertainty as she endeavours to stay in Saint John and cement her worth as an artist. A new life in a new country. Major recognition for effort. The sweetness of it. Saint John and Me will screen at Vancouver's Rim Shots Media Arts Fesival on June 03rd.