THE LATEST FROM THE HIT! MEN

rubarbicon and my first kiss 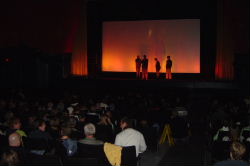 , Oct 2005 - Two of Greater Saint Johns more visibly ambitious filmmakers are Greg Hemmings and , a pair who are driving HIT! Media fast forward into the future.

Appreciative crowds follow the pair everywhere they go, crowds that should be considered extended family more than audience. Why? Because the vibe at a HIT! event is always friendship. It floats around the room like dandelion seeds on a breezy summer afternoon. You know and feel that people want this company to create a breakthrough hit, so along they go for the ride, buying tickets and taking up a spot in the audience pit to whistle, howl or do whatever else they feel inclined to do. 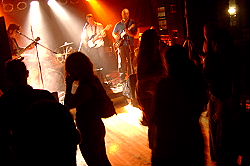 Recently, the tres terrific two brought a couple of their latest projects to the big screen at Kings Square Cinemas. The boys squinted under the coloured lights of the Cinestage, amid the loud cheers of the crowd (photo- above). And that was before the show started. When the lights dimmed, all present were witness to two rock-solid productions; great examples of the local, professional filmmaking talent in Greater Saint John.

MY FIRST KISS, a short film written, directed and edited by , chronicles his lifes romantic kisses from his first one as a child, when he threw up, to his eventual kissing phobia as an adult. While hes long on available women, hes short on courage, in fact, paralyzed by his phobia. Tidby takes his audience on a truly charming film shot in two countries, with a sizeable cast, many of whom were local actors. 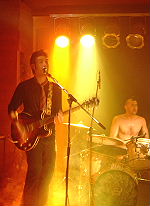 RUBARBICON, a hardworking mockumentary written and directed by Greg Hemmings, clocks in at just over an hour. With the wildly popular band Grand Theft Bus / The Development (photo - R) as its subject, the film takes the viewer, full throttle, through the touring and non-touring, and, making and non-making of a music album. If youre confused, you shouldnt be.

Confusion is the point. And, its very well done. An official selection at the 25th Atlantic Film Festival in , RUBARBICON ended up winning Best Sound Design award for its layered, rich sound.

After the films, a terrific after-party at a nearby location jammed together a large crowd to hear Grand Theft Bus drive it home (photo - L).

Tidby and Hemmings are now traveling in and , peddling their celluloid wares. Stay tuned for more news on the HIT! Men in the coming months.