rebel with a cause 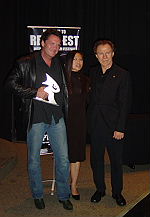 Madsen (SIN CITY / KILL BILL: VOL 2 / DONNIE BRASCO / FREE WILLY) has built his career on a variety of roles ranging from the sensitive boyfriend of Susan Sarandons character in THELMA AND LOUSE, to the knife wielding psychopathic con, Mr. Blonde, in RESERVOIR DOGS, a breakthrough role that left moviegoers drop-jawed and screaming for more. Hes appeared in well over a hundred roles, and has a soft spot for indie filmmakers. It is this that I want to ask him about. It is this that I find particularly intriguing. He is an established actor with a long trail of commercially successful films to his credit, yet he chooses to routinely work with indie filmmakers.

Earlier in the evening, to a prolonged standing ovation, Madsen received the inaugural Equinoxe Rebelfest Award in recognition of this commitment to independent filmmaking (photo, L). One of his recently completed features, L.A. DICKS, which screened at Rebelfest International Film Festival, is a low-budget indie. DICKS (an slang term for private investigators), follows the hilarious and bumbling efforts of two P.I.s who mix surveillance with scriptwriting. What they really want is to be famous, and in the movies.

After his high-octane encounters at the entrance, Madsen quietly takes up position in a far right corner, close to some friends, and tucked in beside one of the bars. Within seconds, a rocks-heavy, old-fashioned of his favourite potion glides down the lacquered counter and into his waiting, open hand. A curious mix of people begins to filter into range. They are conspicuous while trying not to be. Such is the life of a actor; a rotating onslaught of fans, hangers-on, and handlers.  Colourful people. Colourful discussions. Most people talk loudly. They want you to hear the names theyre dropping.

I wait for the right moment to approach him for an interview. For now, I watch. 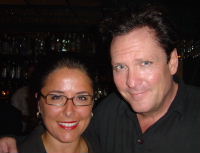 I decide its the right moment. I step forward to ask how hed feel about an interview for Film Front Online, in this crowded, loud environment. He looks at me. He says nothing. I Iook back. A moment or two passes. It feels like many more. I continue to look at him. Im playing a game of chicken with the infamous Mr. Blonde. Im going to run if he puts a hand near his boot top. Just as I begin to think that he will say can I not have some time to myself? he tilts his head to one side, furrows his brow, and punctuates the stillness between us with a simple yes in a gravelly voice that has become his trademark. Before he has a chance to change his mind, I pull out my digital recorder, lean in, and lob the first question. I learn much about Madsen over the course of our conversation.

His commitment to the indie side of the industry made him the logical choice for recipient of the Rebelfest Award. Earlier in the evening, he accepted the hardware from his friend, Hollywood luminary Harvey Keitel, at festival closing ceremonies in a jammed Isabel Bader Theatre in downtown Toronto.

In accepting the award, he had paused behind the mic; reflective, almost emotional.

"You know, Harvey's one of those actors that inspired me when I was growing up and watching movies, and thinking about being an actor. Just being on a set with him, for me, is beyond, you know, what I would have thought would have happened to me from where I originated. I came to Toronto with RESERVOIR DOGS many years ago, and to come back here and represent independent film in this way has meant a lot to me."

Thinking back on this comment, I wonder aloud about this soft spot he has for indie film. I ask him why he eschews the road taken by others who are racing to make it to the A list. He offers two distinct answers. 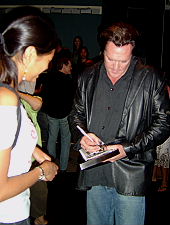 I support indie filmmakers because someone did it for me, once upon a time, he offers, then adds, I thought the movie [L.A. DICKS; an official entry at Rebelfest in which he has a role] was good, and they guys in it are funny, and I want to help them get a shot. Its not a mystery.

To emphasize his point, he relates a view on something that he feels is wrong with the business.

In this industry, people who are on the race to fame, once they get there, they wouldnt stop to help you if your legs were amputated, and you were laying in the street especially if they were on their way to a meeting.

In a world of lost loyalties and friendships that bear price tags, his words carry a purity. My internal cynic is chipped away at. Before me is someone who seems to practise something more people should  helping someone just because you can.

Is Madsen experiencing a philosophical shift at this stage of his life? Many of his acclaimed roles have explored a dark or twisted side of humanity. Is Madsen softening a little?

Id like to be the romantic guy, he says.

My eyes snap upward from my recorder. The actor who was named Second Greatest Movie Villain of all Time by Maxim Magazine has just revealed something surprising. He wants to reveal another part of his persona.

Id like to be the guy that gets the girl. I wanna do something loving and romantic; something that gives goodness to the world. But, they dont call me for that.

His recognition that he doesn't get calls for this type of role is disappointing to him, and that disappointment is palpable. Continuing, he laments that hes a leading man trapped in a bad guys body.

The elusive leading man role. The chance to explore terrain that has been kept from him by casting directors who view him too narrowly. Hes eager to be cast rather than typecast.

I dont want to spend the rest of my life playing killers.

He wants to see scripts. Leading man scripts, with romantic elements, or a great romantic story at their core.

I cant help but wonder if this is brought about by his soon-to-be-born baby, and the sense of mortality that expectant parents feel. Wanting to leave behind a meaningful legacy for your children is something most parents think about.

We talk about his experiences growing up, and he relates his reverence for his father, whom he describes as 'dangerous'. He smiles, admitting that he has been told he inherited the persona. He gives credit to his mother and father for teaching him to deal with adversity. Hes grateful that they drilled important life lessons into him.

When asked what hes most looking forward to, he quickly replies the birth of my son.

It is a fitting response, given that an earlier response to the question of how he wanted to be remembered, long after he was gone, was, I want people to remember that I was a good father, after which he pauses, then repeats, that I was a good father... that I looked after my sons, and, whatever I did, I gave them a good shot at doing whatever they decide to do, because I love themso very much. Im blessed to have my sons. Thats it.

After which, he considers the value of what hes just said, and smiles, repeating one last time, Yah, thats it.